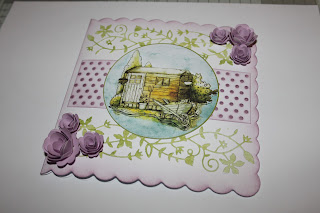 This is my first card that I have put on my blog - Thanks to my tutorial from Amy.

On a 6 x 6 scalloped card I used the small polka dot that special touch mask for the patterned paper, coloured with Tim Holts Distressed ink - Milled Lavender.  The image is from the New Debbi Moore Shabby Chis Garden CD and I have used the following dies: Fairytale Flower Border and Marianne Design Branch & Flowers 1 LR0256
Posted by Natalie at 01:13 1 comment:

I bet you all thought that I had given up this blogging thing?

Jewellery Update  - Wanted to make some more jewellery last night, but thought I would sort my seed beads out - what an exciting night:-)  my sister enjoyed it to:-)

Let me explain a bit further...... about 6 months ago I bought a really nice compartment-ed box with about 10 different lots of coloured seed beads, each colour nicely in it's own compartment, so I open the box to take a closer look and ahhhhhhhhhhh - I think I said something a bit stronger than that!!!!!!  .....The whole lot fell to the floor, so the beads were scooped up and almost thrown into the box, the lid put back on, elastic band attached and the box hidden at the back of the cupboard.  Each Compartment all the same mixed up colour.

I found them last night, and thought it would be a good idea to sort them back into the correct colour groups, obviously thinking it wouldn't take long, especially as my sister and her partner were coming over for dinner........... Do you know how therapeutic it is sorting seed beads into piles, it was so hard to stop sorting - Well 6 hours later and not many words spoken......... we are half way......... roll on tonight for the final sorting:-)

Have a good day

Think Jewellery maybe be my new thing - I made 2 brocelets and 1 neclace last night - Will try and see if I can add a picture - scary stuff.......

Camera is rubbish - dropped one too many times, hence the black spots 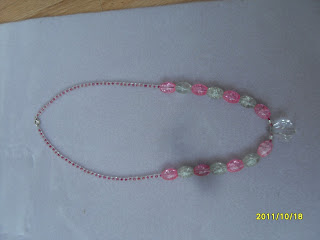 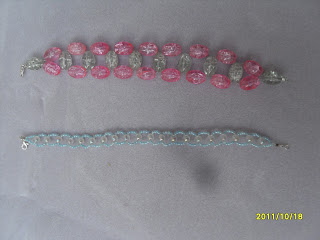 Now this is my first real post - no alcohol involved this time:-)

Had an amazing craft weekend away - World war 3 seemed to start as soon as I walked through the door...... Though David did try to ashore me they had been fighting like that all weekend :-)